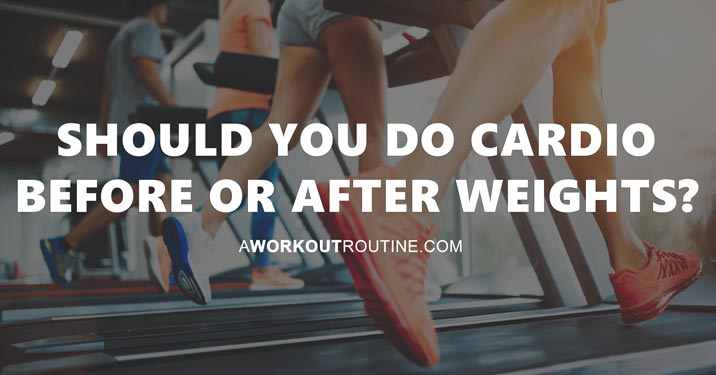 Let’s say your goal is to lose fat, build muscle, or something similar.

Let’s also say that in order to reach this goal as quickly and effectively as possible, you’ve determined that you need to do both weight lifting and cardio.

Now let’s also say that you’re going to be doing both types of exercise on the same day as part of the same workout session.

In this scenario, there’s an important question you’re going to need to answer: should you do cardio before or after weights?

Let’s figure that out right now…

Which Comes First: Cardio or Weights?

For most people, if cardio and weights are going to be done during the same workout session, then…

Why is this, you ask?

Well, many of the reasons you’ll typically see people give for doing cardio after weights involve stuff (e.g. hormones, glycogen levels, afterburn/EPOC, etc.) that is either insignificant in the grand scheme of things, or just good old myth-based nonsense.

The truth is, it really just comes down to basic common sense.

You don’t have to take my word for it.

Studies looking specifically at what happens when you do an aerobic workout before a weight lifting workout found that it had a significant negative impact on strength and performance (sources here and here).

So, it comes down to simply starting with the form of exercise that matters the most. And for most people, with most goals, that’s going to be weights.

What are the two most common workout-related goals most people have? Building muscle and losing fat, right?

So, one form of exercise is required for at least some part of what most people are trying to achieve, and the other is always optional for those same goals.

For this reason alone, weights will usually beat cardio in terms of importance.

From the perspective of performance, safety, and the amount of effort entailed, it also makes more sense to be at your physical and mental best when doing things like squats, deadlifts, presses, rows, pull-ups, lunges, and so on – where you’re lifting challenging weights in ways that need to be technically sound while constantly pushing yourself to progress further each workout – as opposed to something like sitting on a bike or jogging on a treadmill for 30-60 minutes while you watch TV or play with your phone.

Again, weights > cardio in this regard. It’s the type of training that warrants being done first in the majority of cases.

Are There Ever Any Exceptions?

Of course. Like most things, there are always exceptions.

The main one would be if a person’s cardio performance was more important to their goals than their weight lifting performance.

In a scenario like that – such as someone with endurance-oriented goals – it can make more sense to do cardio before weights.

But keep in mind, of course, that endurance goals are less common among the general population than goals like losing fat or building muscle, and in those cases, weight lifting before cardio would still be the ideal setup if they’re both being done in the same session.

A related topic you might now be wondering about is that of the cardio warm-up.

This, of course, would be the short and easy aerobic warm-up people sometimes do prior to lifting for the purpose of raising their body temperature before beginning their actual workout.

Should this type of thing also be done after weights? The answer is (obviously) no.

Because this isn’t a cardio workout. This is a cardio warm-up.

So yes, if you’re going to be doing a cardio warm-up, that should still be done first.

For Cardio, Is One Time More Effective Than Another?

Alright, so we know that in the majority of cases, it makes the most sense to do cardio after lifting. That is indeed my recommendation.

But, what about the timing of cardio in general? Does that matter? Is one time better or more effective than another?

That’s a good question, and since the people who ask it are almost always doing so from the perspective of losing fat, that’s the perspective I’m going to answer it from.

So… is there any fat burning advantage/disadvantage between doing your cardio:

The answer is no.

So… when should you do your cardio workout? Whenever the hell you want.

In the end, doing whatever best suits your schedule/preferences and therefore makes you most likely to consistently get it done will always be the most important part. (Additional details here: When Is The Best Time To Work Out?)

“But I Heard Fasted Cardio Was Better?”

There is indeed some truth to the fact that your body burns more fat for fuel during fasted cardio than it does during fed cardio (sources here and here).

The thing is… the amount of fat you burn during exercise isn’t what matters.

Which means, with all else being equal, there is no fat loss advantage to training fasted.

In fact, when studies (sources here and here) take two groups of people and have one do their cardio in a fasted state and the other do theirs in a fed state, no differences are seen and the same amount of body fat is lost.

A recent meta-analysis came to the same conclusion.

Simply put, there’s no meaningful difference between fasted vs fed cardio in terms of body composition.

236FacebookTwitter14Pinterest
250
SHARES
ABOUT THE AUTHOR