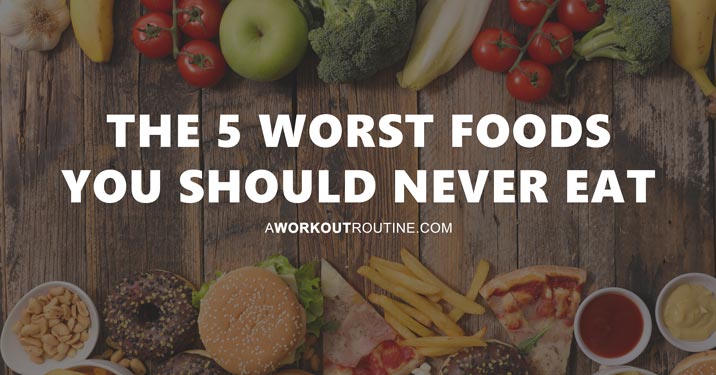 Have you ever come across an article like this before?

I have. Lots of them.

And what I’ve noticed about them – aside from the fact that they’re usually all shit – is the fact that they vary based on the opinions, beliefs and personal preferences of the misinformed person who happens to be writing it.

Common Examples Of These Stupid Lists

So, the truth about these lists is that they’re just a bunch of foods that the one specific person who wrote it has found to be bad for them.

Sometimes their reasoning is completely sound and logical. Sometimes it’s strictly due to believing in silly diet myths and misinformation.

But whatever it may be, the end result is the same: they’ve come up with a list of foods that they feel THEY should avoid, and they’re trying to pass that off onto the rest of us as a list of foods WE ALL need to avoid.

Which is why, today… we’re going to do things a little differently.

Here now is the ultimate unbiased, evidence-based list of foods that everyone should legitimately avoid…

You’d think this would be common sense – to avoid foods you don’t actually like eating – but it’s not.

People often force themselves to eat foods they don’t truly enjoy (or, in certain cases, flat out hate) because they think they have to.

Why do they think this, you ask? There are a few reasons…

Now, granted, many of the foods people usually force themselves to eat in these scenarios are “good” foods that often contain some nutritional characteristic that is beneficial to us in some way.

But the big problem here is that the true key to the success of EVERY diet is your ability to adhere to it for the long-term.

And do you know what makes long-term diet adherence significantly harder than it needs to be? When your diet involves eating foods you don’t actually like.

That’s just going to make you end up hating your diet, which will eventually lead to you straying from it.

For this reason, your diet should be filled entirely with foods you enjoy eating so it’s as sustainable for you as it can realistically be.

Now, I’m obviously not saying you should eat cookies instead of broccoli because you “hate broccoli” and “love cookies.” In this example, I’m just suggesting that you eat the specific vegetables you like the most, and completely avoid the ones you don’t like… even if those vegetables were the ones you thought you needed to eat.

I’m also suggesting that if you hate brown rice but love white rice… you never need to eat a single grain of brown rice ever again. You can exclusively eat white rice and there won’t be any meaningful difference in the end.

And if you hate walnuts but love almonds, feel free to let almonds be the only nut you ever eat… even if walnuts are considered a “superfood” and almonds aren’t. That nonsense doesn’t matter.

You can apply this same bit of common sense to every single food in existence.

Because the truth is, there is nothing so special about any one food that requires you to eat it or force yourself to try to make it a part of your diet if you don’t want to. There are always other foods and combinations of foods that can be eaten instead that will provide the same benefits. Foods that you actually enjoy eating.

And as long as your total calorie, macronutrient and micronutrient intake is what it needs to be each day… it won’t make any difference whatsoever.

Well, except for the tiny difference of making your diet more enjoyable for you, thus making you more likely to sustain it and actually reach your goals.

2. Foods You Have (Legitimate) Physical Issues With

Do you have any legitimate food allergies? Or a legitimate intolerance?

Are there any foods that legitimately cause physical problems for you?

This could mean gas, bloating, stomach discomfort, nasal congestion, lethargy, cramps, constipation, diarrhea, skin problems and more. In the case of legitimate allergies, it can even mean death.

Are there any foods that cause these types of physical issues for you?

If so, you should avoid those foods.

This is another one that seems obvious, but there are three ways people screw it up anyway…

So, if there are foods that have any sort of negative physical impact on you, you should avoid those foods or at least minimize your consumption of them.

But if they don’t have a negative physical impact on you? Avoiding them anyway would be both silly and unnecessary.

3. Foods You Have Ethical Issues With

The most common example of this would be vegans/vegetarians and animal products. Another example would be people who have religious restrictions on certain types of foods.

Me personally? I eat meat. And religion? Not really my thing.

But that’s just me. And whether or not I (or anyone else) agrees with your food choices doesn’t really matter at all.

So, if you have a good ethical reason for avoiding a certain food, then by all means, feel free to do so.

My only suggestion would be to adjust as needed to ensure you don’t end up missing out on anything nutritionally that those foods would have provided (e.g. vegans/vegetarians need to work a little harder to get a sufficient amount of high quality protein per day).

4. Foods That Make Your Diet Unsustainable

These are the types of foods you’ll commonly see on the “good foods you should be eating” lists.

Whether or not that’s actually true is a topic for another day.

But for today, the thing you need to understand is that while these are all fine food choices for some people, they are overly expensive and inconvenient for others.

For all of these reasons and more, there may be a bunch of otherwise “good” foods on paper that simply aren’t going to be “good” for you in the real world.

Should you force yourself to try to make them a regular part of your diet anyway?

Will doing so make things so hard and inconvenient for you that it affects your long-term dietary adherence? If so, then no. You should avoid those foods.

Because, like I’ve already mentioned, the key to the success of every diet is long-term adherence, and that needs to come before everything else.

5. Foods You Can’t Eat Without Overeating

I’m a fan of moderation… even when it comes to the yummy fun stuff some people (hello cleaner eaters!) will claim should never be eaten at all.

Because as long as your total calorie, macronutrient and micronutrient intake is what it needs to be each day, and the majority of your diet (80-90%) is comprised of higher quality nutrient-dense foods, there’s nothing wrong with getting a small portion (i.e. 10-20%) of your overall calorie intake from these kinds of foods.

That’s exactly how we do it in Superior Fat Loss (and with great success, I might add).

Why? Because for most of us, keeping these typically-off-limit foods around in this manner is hugely beneficial for keeping us happy with our diet, which makes us much more likely to consistently sustain it. And that, yet again, is the key to every diet.

However, this isn’t something that applies to everyone the same way.

Some people are simply unable to consume certain foods “in moderation.” The 90/10 or 80/20 rule doesn’t work for them.

These are “all or nothing” people. They can’t just have a couple of cookies. They need to have the whole box. 100/0 is the ratio they need in order to be successful.

And that’s a problem.

One way to avoid this problem? By avoiding the foods that trigger it.

These Are The Worst Foods For Your Diet

So, which foods should you avoid?

Unlike every other list of “foods you should never eat,” this one is completely free from biases and misinformation, and every single item is specific to your own personal needs and preferences.

Which, of course, is the only way it should ever be.

846FacebookTwitter2Pinterest
848
SHARES
ABOUT THE AUTHOR