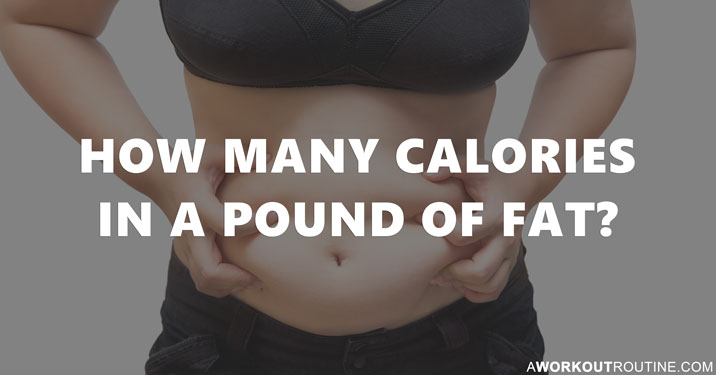 ANSWER: Good question, and there are two important facts you need to understand in order to properly answer it. Let’s start with the easiest fact…

There are about 3500 calories stored in a single pound of body fat. This “old rule” is not a myth at all. It’s absolutely true. (source)

But here’s where things get a little complicated, because while the “3500 calories = one pound” rule is indeed true, it rarely works out that way in the real world.

The 4 Problems With This “Rule”

When people learn that there are 3500 calories in a pound of body fat, they immediately assume two things to be true:

So, the assumption goes, the fact that there are roughly 3500 calories in a pound of body fat means that a deficit or surplus of 3500 calories will always result in exactly one pound being lost or gained.

The 3500 calorie rule applies strictly to one pound of body fat.

The problem, however, is that we track losses and gains of body fat by tracking our body weight, and “weight” can be a lot of things besides strictly body fat.

Why does this matter? Because we never lose or gain only body fat. The other things on this list are constantly being lost and gained right along with it.

For this reason, our body weight rarely changes at a perfect 1:1 ratio to our body fat. In fact, it can sometimes be off by a significant amount.

For example, it’s extremely common for a person to lose body fat but yet see their body weight stay exactly the same or sometimes even go up! In many cases, this scenario can last for weeks at a time thereby causing the person to falsely believe their progress has stalled (or regressed) all while fat is still being lost just fine (details here: Why Am I Not Losing Weight?).

What’s happening in this scenario is that they are gaining something else (most often water) that is counterbalancing their weight on the scale (or sometimes even exceeding it), thus preventing their fat loss progress from actually showing.

This is why it’s so common for people to gain 2-5lbs (or more) overnight after one bad day of eating. They’ll then think “oh no, I gained 2-5lbs of fat in a day!!” when in reality, all they actually gained is 2-5lbs of temporary water weight because there’s no way they ate the insane 7000 – 17,500 additional calories necessary for 2-5lbs of actual body fat to be gained in a 24-hour period.

This is a topic I cover in detail right here: Why Am I Gaining Weight?

For this reason, even when you have a perfectly accurate 3500 calorie deficit or surplus in place that should cause exactly one pound of weight to be lost or gained, it’s unlikely that you’ll actually see that happen.

Problem #2: Calories Can Go To/Come From Muscle, Too

The next semi-related problem preventing this rule from working out the way we think it should is the fact that the excess calories we eat while in a surplus don’t only get stored in the form of body fat, and body fat isn’t the only source of stored calories we burn for energy while in a deficit.

There’s also muscle, and it contains a different amount of calories per pound (something in the 600-700 range) than fat does.

Why does this matter? Because when we create a caloric deficit in an attempt to lose only body fat, it’s extremely common to lose at least a tiny amount of muscle tissue along with it. And when we overeat and expect to gain exactly one pound of fat, it’s very likely that at least a tiny amount of those excess calories will be stored as muscle tissue.

So even if you ignore the issues of short-term weight fluctuations caused by something like water, the longer-term weight being lost and gained is still rarely going to be only body fat.

The next big problem with this 3500 calorie “rule” is the fact that metabolic rate changes because the human body adapts to maintain homeostasis.

What does that mean in plain English, you ask?

Let me give you a few examples.

Let’s pretend some person eats 3500 excess calories over the span of a week and should therefore end up gaining exactly one pound of fat. Let’s also pretend the previous two problems don’t actually exist, so the only weight they will gain or lose is strictly body fat.

Even under these nonexistent conditions, this person STILL wouldn’t gain exactly 1lb.

Now let’s reverse the scenario and pretend some person eats 3500 fewer calories over the span of a week and should therefore end up losing exactly one pound of fat. And let’s continue to pretend that the previous two problems with water weight and muscle don’t actually exist, so body fat is all that can be lost or gained.

So, even when you put an exact 3500 calorie deficit or surplus in place, and even when you do so in a magical fake scenario where body fat is the only form of weight a person can lose or gain, you’re STILL not going to lose or gain precisely one pound because various metabolic changes will alter that deficit or surplus into something different than the 3500 you intended it to be.

Now let’s ignore all three of the previous problems.

Your 3500 calorie deficit or surplus STILL won’t result in an exact one pound weight change because your 3500 number is never going to be perfectly accurate.

What I mean is, you can closely track every single bite of food you take right down to the very last gram, log it all in some diet tracking app, and be obsessively consistent with it. And you can wear ten Fitbits on each arm to track how many calories you’re burning as well.

Why? Because there will always be some (at least) tiny error, mistake or inaccuracy taking place somewhere (whether you realize it not) that will cause your intended calorie intake or output to be off to some extent.

In others, they’re normal meaningless differences that won’t matter in the long-term. But, even then, they still represent differences that are enough to just slightly throw off the deficit or surplus you think you’ve created and the weight loss or weight gain it causes.

Does This Make The 3500 Calorie Rule Wrong?

After taking all of the above into account, many people will conclude that the 3500 calorie rule is wrong, or a myth, or a lie, or a scam, or maybe even “proof” that weight loss is about carbs or sugar (or some other myth-based nonsense) rather than calories.

And all of those people would be wrong.

(Especially the last ones. A caloric deficit is and always will be the sole cause and requirement of losing fat. Details here: The Truth About Fat Loss)

The truth is, despite the flaws that prevent it from working out the convenient way we’d all like it to, the “rule” of there being 3500 calories in a pound of fat is still an extremely useful method for estimating how much weight a person will lose or gain.

We simply need to be aware of these flaws so we can use this “rule” for what it is (a good-enough method for estimating weight changes) and not as some 100% perfectly accurate guaranteed method for knowing exactly how much weight we will lose or gain.

As long as you do that, you’ll be doing it right.

Not sure how many calories you should be eating per day to lose weight? No problem.

I’ve got you covered right here: How Many Calories Should I Eat A Day To Lose Weight?

332FacebookTwitter5Pinterest
337
SHARES
ABOUT THE AUTHOR