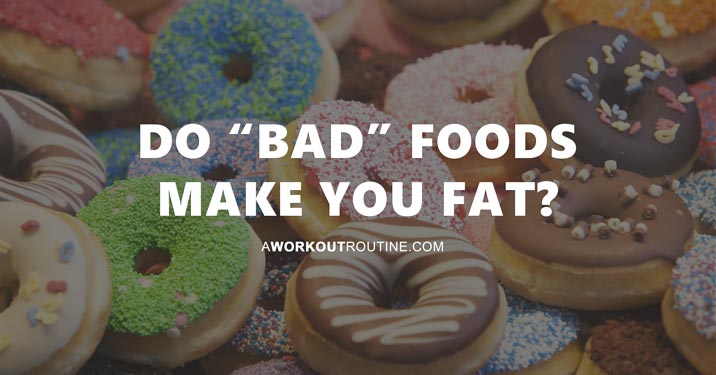 People often ask me if eating a certain food, food group, or nutrient will make them fat.

Really, you can think of any food in existence and there will likely be people out there right now who are avoiding it because they think eating it will make them gain fat.

Why Do People Think These Foods Will Make Them Fat?

Simple: because they heard it… somewhere.

And that’s pretty much all it takes.

You see, every food, food group, and nutrient on that list has a huge group/cult of people who have developed a misinformed financial or emotional attachment to the belief that this ONE specific thing is the sole underlying cause of fat gain.

And not eating that ONE specific thing? That’s supposedly the sole underlying cause of fat loss.

And these people are everywhere – each with their own fancy diet built around their ONE specific belief (e.g. low carb, keto, Paleo, low fat, anti-sugar, clean eating, etc.) – and they all want to make their dietary belief become everyone’s dietary belief.

That’s why it’s so easy to come across headlines, articles, books, social media posts, trainers, coaches, authors, doctors, friends, or family members claiming it’s carbs that make you fat, or it’s sugar that makes you fat, or it’s any of these dozens of other supposedly “bad” foods that truly make you fat.

And where does that leave you? It leaves you confused as hell.

But the good news is, it’s really not that confusing at all. In fact, there is one simple definitive answer that will instantly clear up everything.

There is a seemingly never-ending (and contradictory) list of foods that will supposedly make you fat. This is a result of the countless diets in existence, each built around a certain belief about what causes weight loss and weight gain, and which foods need to be eaten or avoided to make it happen.

Will Eating [insert any food] Make Me Fat?

Regardless of which food, food group, or nutrient you’re asking about, there is only ONE answer to this question and it’s ALWAYS the same.

The only thing that will EVER make you fat is the consistent consumption of more calories than your body burns. This is called a caloric surplus, and it is the sole cause of fat gain.

No, it doesn’t matter what food sources are providing these surplus calories.

Nor does it matter if it’s something that some person considers to be “good” or “bad,” “healthy” or “unhealthy,” “clean” or “dirty,” or whatever other stupid label they’ve decided to put on their food.

It also doesn’t matter if it’s protein, fat, or carbs. White rice or brown rice. High glycemic or low glycemic. Superfoods or junk foods. Walnuts or candy. Chicken breasts or pizza. Beans or cake. Natural food or processed food. Sugar or fiber. Fruits or vegetables. Cookies or ice cream. Soda or alcohol. Or… literally… anything… else.

When that TOTAL amount of calories consistently constitutes (say that 5 times fast) being in a surplus, you gain body fat. When it doesn’t… you don’t.

So… will eating [insert anything here] make you fat?

YES, if it leads to a consistent caloric surplus.

Fat loss and fat gain are dictated by calories in vs calories out. Which means if you eat too much of ANYTHING (even “good” and “healthy” things) and a consistent caloric surplus exists, you will gain body fat. And if a consistent caloric deficit exists (even if the calories you’re eating come from “bad” and “unhealthy” things), you will lose body fat. It’s always total calories that determines whether you lose or gain body fat, not the specific sources of those calories.

Wouldn’t it be awesome if someone went on a really high carb, high sugar, junk-food-filled diet and yet still lost weight just fine because their total calorie intake remained where it needed to be for a deficit to exist?

Wouldn’t that be fantastic proof that it’s not the specific foods, food groups, or nutrients we eat that make us fat (or the ones we avoid that make us lose it), but rather our total overall calorie intake putting us into a surplus (or deficit) that does it?

Wouldn’t that be a lovely way to confirm the point I just finished making?

Well… we’re in luck. Because this proof exists.

I’ve brought up The Twinkie Diet before, but it’s the kind of thing that warrants being brought up again and again. And again right now.

In 2010, Mark Haub, a professor of human nutrition at Kansas State University, set out to prove the very same thing I’ve been explaining: that fat loss and fat gain happen as a result of calories in vs calories out, and that a caloric deficit will cause a person to lose fat no matter what food sources those calories come from.

To do this, Mark went on a 10-week diet comprised primarily of high carb/high sugar junk foods.

However, he also created a caloric deficit.

No, I’m not recommending that you eat like this or even remotely close to this. I’m just putting it out there as the perfect point-proving example that it is.

There are actually plenty of additional examples of people going on weird/extreme diets like this – where the person eats foods that are commonly viewed as inhibitors of fat loss – but who go on to lose fat just fine while eating them.

And not just eating them as part of their diet, mind you. In some of these examples, they were literally the only things eaten the entire time.

Please take note of the fact that most of these foods are NOT Paleo-approved. And many are super high in carbs and/or sugar. And high in “bad” fat. And some contain dairy or gluten. And are highly processed. And most, if not all, would be considered “bad” and “unhealthy” and “dirty” by most people’s standards.

And I can guarantee you that there is some diet group/cult out there somewhere claiming that each one is the ONE specific thing that makes us fat, and that it MUST therefore be avoided in order for fat to be lost.

All of the people on all of these “diets” went on to successfully lose body fat just fine.

And hey, do you know who else has gone on to lose a ton of body fat just fine?

The millions of people who eat these types of “bad” foods in moderation (myself included) as part of a flexible approach to dieting. The kind of sane, enjoyable, and sustainable approach my own Superior Fat Loss and Superior Muscle Growth programs are built around.

All while eating the foods that were supposed to be having the opposite effect.

Unless, of course, you understand the basics of energy balance and why calories in vs calories out is what matters most here.

Then it’s really not that shocking at all.

And again, please note that I don’t actually recommend any of the extreme “diet” examples I listed above. They’re all far from ideal (or in some cases, complete shit) for overall health, controlling hunger, building muscle, maintaining muscle while losing fat, preventing nutrient deficiencies, and so on. And none are sustainable in the long-term.

BUT… they all still serve as evidence that it’s not the specific foods we eat or don’t eat that cause fat to be lost or gained. It’s always total calories.

If real-world examples aren’t good enough for you, maybe a whole lot of logic and a few dozen studies will do the trick?

If so, I wrote an article that breaks down the low carb diet and explains the real reason why it works (spoiler: it makes you eat fewer calories), why carbs don’t make us fat, and why the effectiveness of the diet itself has nothing whatsoever to do with carbs.

Feel free to check it out: The Truth About The Low Carb Diet And Weight Loss

You may also like: Is Sugar Bad For You?

There is more than enough real-world and scientific evidence present to conclusively state that it is NOT carbs, sugar, fat, gluten, dairy, fruit, alcohol, fast food, junk food, red meat, non-Paleo food, or any other one specific food, food group, or nutrient that makes us fat. That always comes down to total calories.

So What Foods Should You Eat?

Now that you understand why it’s total calories and not the specific foods that provide those calories that determines if we lose fat or gain fat, you may be wondering what foods you should get your daily calories from.

That’s a good question, and the simplest answer to it is this…