I like to think most people understand that they need to eat LESS calories to lose weight, right?

We’re all aware of this, aren’t we?

What’s that now? We’re not?

Most people think it’s carbs, sugar, fat, gluten, fruit, fructose, dirty foods and/or foods that cavemen didn’t eat that we need to eat less of in order to lose weight?

Excuse me while I go bang my head against a wall to forget this reality.

As I was saying, fat loss and fat gain are determined by calories in vs calories out. Create a deficit and you lose, create a surplus and you gain. If you’d like a more thorough explanation of this (and why it’s NOT carbs, sugar or whatever else), read this one: How To Lose Fat.

And that brings us to the subject of this article.

Which is… the idea that there are times when eating less calories STOPS you from losing weight, and then eating more calories causes you to START losing again.

Let’s begin with the first half of that statement.

Have you ever heard of the mysterious state known as starvation mode? If not, please allow me to fill you in.

Starvation mode (sometimes referred to as “survival mode”) is the idea that not eating enough calories will cause a person to STOP losing fat or possibly even GAIN some despite being in a caloric deficit.

As in, if you eat too few calories, your metabolism breaks or completely shuts down or some such nonsense, and, in an effort to keep you alive, your body will hold on to all of your body fat and prevent you from losing any of it until… wait for it… you eat MORE calories.

This concept/myth then leads to the following type of conversation on diet forums (I’m looking at you, MyFitnessPal) and throughout social media…

Person B: “Your body has entered starvation mode because you’re not eating enough, so it’s holding on to all of your body fat and stopping you from losing weight.”

Person C: “Yeah, Person B is absolutely right. I was in starvation mode myself at one point, and it sucked! Eventually I was in it for so long that I started gaining fat because I was eating so little! Once I started eating more, I instantly began losing weight again.”

It’s because of the many Person Ds of the world and the fact that they frequently link to my starvation mode article (which then sends traffic to my website from these sources) that I know just how often these stupid conversations are happening.

Why do I call them stupid? Because the entire concept of starvation mode – that not eating enough will stop fat loss (or cause fat gain) – is as stupid as it gets.

In that aforementioned article of mine, I reference Holocaust victims, starving children in Africa, reality show contestants, anorexics, the infamous Minnesota Starvation Experiment, and a whole lot of commonsense to show why starvation mode is nothing more than a stupid myth.

Feel free to read it for all the fun details. 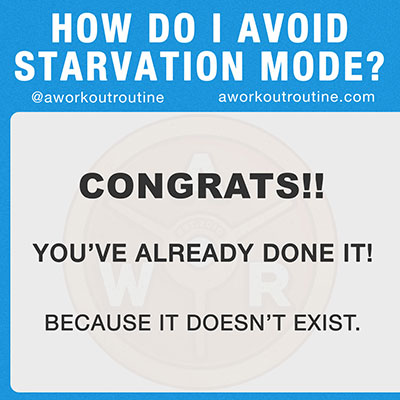 If starvation mode isn’t real, then how do I explain how there are so many overweight people who are eating as little as 600 – 1200 calories per day but still aren’t losing any weight?

This kind of thing happens ALL THE TIME and various weight loss studies confirm it. (Additional details here: The 1200 Calorie Diet)

That is when the person is indeed eating the (often excessively) low number of calories they claim to be… on certain days.

BUT, they are then overeating (or binge-eating) on the other days to a degree that cancels out whatever deficit they created and causes them to end up breaking even at maintenance for the week.

And when you’re at maintenance instead of in a deficit, you stop losing weight.

This is how you get people (fun fact: it’s almost always women) who claim to be on some crazy low-calorie starvation diet eating 600 – 1200 calories per day but still aren’t losing any weight.

In reality, they’re either eating more than they think they are, or they’re legitimately eating the amount they claim some of the time (be it as little as one to as many as six days per week), but then overeating by thousands of calories on the other day(s) due to the excessive hunger that the previous extreme restriction caused.

Sometimes it’s so bad that this restrict-and-binge cycle doesn’t just land the person at maintenance for the week and prevent fat loss… it actually puts them into a surplus, thereby causing fat gain.

This, along with other related problems (e.g., water weight gain), is how you get people saying “I starved myself eating 800 calories per day but I still gained weight! It must be starvation mode!!”

But wait! I know what you’re thinking now: what about the second half of that original statement?

Why Do People Claim To Lose Weight Again When They Start Eating More?

If what I’m saying is true (and it is), then how does any of this explain the next claim these people often make, which is that they finally started losing weight again as soon as they began eating MORE calories?

Doesn’t this prove that I’m wrong and that there are times when eating too little stops weight loss, and eating more restarts it?

There are actually two very logical explanations for why people think eating more made them start losing fat again:

What Does All Of This Mean?

By the way, if you’d like to lose fat while avoiding all of these annoying myths, mistakes and problems, and pretty much everything else that sucks about losing fat, feel free to check out my new program: Superior Fat Loss

I created it for this very purpose.

1.1kFacebookTwitter10Pinterest
1.1k
SHARES
ABOUT THE AUTHOR