A little over a year ago, I wrote an article that contained 11 mostly-sarcastic-yet-entirely-accurate reasons for why a person can’t lose weight. It has since gone on to become one of the most popular articles I’ve ever written. Which is nice.

You know what’s less-nice? When I STILL get 40 emails/messages/comments a day from people who STILL claim to be “doing everything right” but yet “STILL can’t lose weight.”

Now when this happens, the first thing I do is send the person to that article I just mentioned. And from there, one of three potential outcomes will occur.

The first is that the person reads it, understands my points and goes on to successfully lose weight. Awesome! The second is that the person completely misses/ignores my points and calls me an asshole instead. Much less awesome, but still kinda fun. The third outcome is a little different, and it stems from the fact that there are two additional reasons that I should have included in that article but somehow forgot.

To make up for it, I’m going to explain both of those reasons right here, right now… and recap that original reason as well. Ready? Here are the 3 reasons for your lack of weight loss…

1. There Is No Deficit

Technically, this is the only legitimate reason for why a person can’t lose weight, so I HAVE to mention it. That original article I wrote covered this fact pretty well, so I’m not going to repeat it all again. I will however link you there (11 Reasons Why You’re Not Losing Weight) and to a newer and even better version I recently wrote (36 Reasons Why You’re Not Losing Weight) and give you a quick summary. Which is this…

As long as you’re a relatively healthy person (e.g. no thyroid issues… and if you’re unsure, you should see a doctor and find out), then you’re either eating more calories than you think, burning less calories than you think, or some combination of both… and no deficit exists. That’s it. Always. 100% of the time. There is nothing else it could be.

And this “deficit” I’m referring to is of course a caloric deficit, which is the one and only cause of fat loss. Details here: How To Lose Fat and What Is The Best Way To Lose Weight Fast And Keep It Off

So if it appears as though you can’t lose weight no matter what you do, the very simple answer is that you’re just not doing the one thing you actually need to be doing, which is creating a caloric deficit. 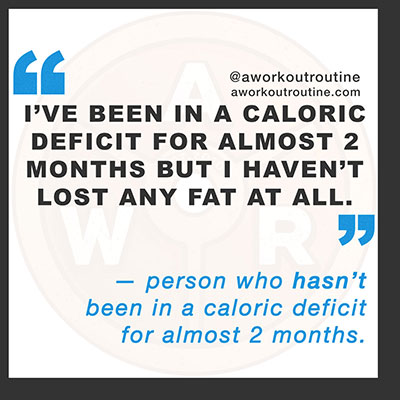 Which means it’s not starvation mode. It’s not because “muscle weighs more than fat.” It’s not your carb intake, or your fat intake, or how clean or dirty your specific food sources are, or the glycemic index, or your meal frequency, or your nutrient timing, or any of the other nonsense people will commonly consider when the weight loss they’re trying to make happen doesn’t actually happen.

It’s always just a lack of a caloric deficit, potentially caused by everything from an ineffective diet/workout program, to a lack of compliance on an effective diet/workout program, to unknowingly underestimating intake, overestimating output, or just flat out miscalculating or making some kind of mistake somewhere that will cause a person to think they’re in a deficit when they are in fact NOT in a deficit.

Which happens constantly… to the point where I’ve had more than one person swear on the lives of their children (dafuq?) that they’re eating/burning exactly what they need to be, only to eventually realize they weren’t. As far as I know, the kids are thankfully still alive and well.

Again, that original article explains all of this in detail: 11 Reasons Why You’re Not Losing Weight

This would be another good one to read: 12 Causes Of Unexplained Weight Gain

So that’s the only real reason why a person will be unable to lose weight. However, there are still scenarios that can and do occur in which a person will successfully be losing weight but just THINK that they’re not.

The first such example of this occurs due to improperly tracking your weight… and then basing your progress on it.

Let me take you through a few of the common scenarios I see on a regular basis:

I can keep going, but I think I’d run out of letters. And I think you get the idea.

Which is that in all of these scenarios, the person is basing their entire weight loss progress (or lack thereof) around what the scale is telling them, while failing to properly use that scale and/or properly perceive what it’s telling them.

Why is this a problem? Because while your body weight is a very useful tool for tracking your progress, you must also realize that the numbers you are seeing aren’t always an accurate representation of what your body is truly doing. Especially in scenarios like these.

This is because your body weight can and DOES change from one day to the next (or even one hour to the next) as a result of a loss or gain in muscle, fat, water, glycogen, poop, food intake and more. That means daily fluctuations in body weight (plus extra monthly fluctuations for women) are extremely common and normal. And they’re constantly taking place without your knowledge.

Which means it’s possible for a person to be in that required deficit making progress BUT YET incorrectly come to the conclusion that they’re not… all because they’re not properly tracking that progress. So it’s not that you can’t lose weight in these cases, it’s just that you’re doing a poor job of seeing that it’s happening.

So how do you prevent this?

Additional details here: When And How Often Should You Weigh Yourself

Also keep in mind that this is really only ever going to be a short term issue. Meaning, if you’re following these guidelines, weighing in as accurately as possible, and yet still find that 3, 4, 5+ weeks are passing without any weight being lost… then guess what? You’re just not in a deficit.

3. You Have Unrealistic Expectations

And finally we have a second scenario where a person is in fact losing weight and just thinks they’re not. But, instead of it being a result of improperly tracking their progress, it’s because they have unrealistic expectations for what that progress should be.

Person: I can’t lose weight no matter what I do.
Me: How long have things been stalled?
Person: About 1 month.
Me: So you haven’t lost any weight whatsoever in a month?
Person: I lost maybe 3lbs this month if I’m lucky.
Me: So then you have lost weight?
Person: Well if you want to look at it that way, then I guess so. But it’s only 3 pounds so it just doesn’t seem like anything.
Me: First, 3lbs lost in a month is actually pretty good progress for many people. Second, it shows that you ARE losing weight. And third, I think I’m going to go bang my head into a wall.

See what happened here? A person makes decent realistic progress and it registers to them as making no progress at all.

Why? Most often because they assumed they were going to lose 10 pounds every week or have the six pack of their dreams overnight or whatever other unrealistic garbage they’ve been brainwashed into believing.

And so you end up in a scenario like this, where a person actually sees they’ve lost weight but still comes away complaining that they can’t lose weight. Logical? Not at all. But since when is anyone ever logical when it comes to weight loss?

So why can’t you lose weight? Because you’re not in a deficit.

Why can it occasionally SEEM like you can’t lose weight even though you are? Because you’re not properly tracking your progress and/or you have unrealistic expectations for what that progress should be.

Whichever it is, the solution is still pretty simple.

NEW: My brand new fat loss program, Superior Fat Loss, is now available. It’s completely designed to allow you to lose fat as quickly and effectively as realistically possible… WITHOUT losing muscle, or feeling hungry all the time, or giving up the foods you love, or doing tons of cardio, or following annoying diet rules, or experiencing excessive metabolic slowdown and plateaus, or regaining the fat after you lose it. You can learn all about it right here: Superior Fat Loss

868FacebookTwitter151Pinterest
1k
SHARES
ABOUT THE AUTHOR

80 thoughts on “Why Can’t I Lose Weight? 3 Reasons For Your Lack Of Weight Loss”