One of the MANY never ending arguments taking place on various training forums revolves around the subject of weight lifting straps.

The reason these seemingly benign questions lead to arguments is because people in the weight training world tend to have some very strong opinions about weight lifting straps and their usage.

Of them, I’ve found the two most common to be:

Can you guess which of the two opinions tends to be the most popular among the typical trainee on a typical weight training forum? Yup… usually #1. Now let’s take a look at why it’s wrong.

But First… What Are Weight Lifting Straps? 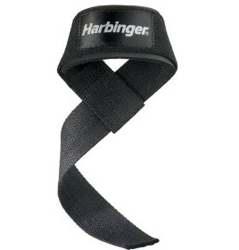 Just in case there is anyone reading this who isn’t familiar with straps, they’re used to help you hold the weight in your hands. You loop one end around your wrists, and wrap the other end around the barbell or dumbbells (or whatever else), thus basically attaching the weight to your wrists/hands.

Doing so improves your grip on the weight you’re holding and helps prevent it from sliding out of your hands.

This happens all the time for any number of reasons, the most common of which are a lack of grip strength, sweating, having smaller hands, gripping something with no knurling on the handles, or just overall grip fatigue as you near the later part of a set.

Weight lifting straps help prevent that, and there’s no debating their effectiveness in this regard. Instead, the debate is over whether you should actually use them in the first place. Here’s what I mean…

Why “NEVER Use Straps” Is The Wrong Idea

(Let me preface this by mentioning that this article is aimed more at people training to build muscle or improve the way their body looks rather than people training specifically for performance or competition. Although, it can sometimes apply just the same in those cases, too.)

A lot of people like to claim that weight lifting straps should never be used under any circumstance. To me, this is just one of those “I’m so HaRDCoRe!!” things people say to sound cool despite how dumb it actually is.

Other similar examples include “everyone MUST do exercise XYZ” and “squats are ALWAYS better than leg presses” and “EVERYONE must always lower the bar all the way down to their chest when bench pressing.”

You know, just something someone said at some point to be definitive about a subject despite very few diet/fitness subjects actually being that absolute. And then a bunch of clueless people just started repeating it because it adds to the “I’m so cool and hardcore” persona they’re trying to portray (usually to impress their even more clueless friends or a bunch of 14 year olds on some bodybuilding forum).

But in reality, it’s just wrong. If your grip is giving out before the target muscle group(s) you’re training, that’s a problem. If the weight is sliding out of your hands too soon and hindering your ability to perform a given exercise with a weight you’re otherwise capable of using, that’s a problem.

Straps are the quickest and simplest solution to these problems. They can help during every “pulling” exercise (from deadlifts to rows to pull-ups) or really any exercise that involves holding a weight against gravity (like shrugs or dumbbell lunges).

So why the hell shouldn’t they be used in this capacity?

This is the point when people like to argue that using straps doesn’t FIX the problem, it just COVERS UP the problem. Meaning, you’re not legitimately improving your ability to hold a weight, you’re just bringing in an outside element to help you hold the weight.

You know, like a crutch you’re relying on to make up for your inability to grip the weight in the way you need to for the duration you need to.

And this supposedly means that weight lifting straps are just preventing your grip strength from being improved. Instead, straps just allow you to cheat and lose out on training your wrists, forearms, hands, fingers and overall grip.

To which I say, who gives a shit?

I’m doing these exercises to train my upper back, or lats, or lower back, or traps, or quads, or my entire posterior chain. That’s it. If I want to train my grip, it should be done separately on its own time. Not while simultaneously training something else that matters a whole lot more.

And certainly not at the expense of it.

So if using straps helps me in this regard, that’s all I care about. Anyone who lets their set end at rep #4 because their grip gave out when the target muscle group they were training was capable of 8 reps is a moron.

If you want to improve your grip strength… do some specialized grip training. If you want to prevent the weight from sliding out of your hands during deadlifts, rows, pull-ups, shrugs or whatever else… use weight lifting straps.

When Should Straps Be Used?

Now that you understand why straps can and often should be used, you may be wondering when exactly that is. Every set? Every exercise?

Well, I like the common sense approach: use them only when you need them.

So for example, if you’re only having problems during the heaviest set (or a few of the heaviest sets) of an exercise but the rest are fine, then only use them during those specific sets. The same goes for if you’re only having problems during the later sets of an exercise when hand/wrist fatigue from earlier sets is kicking in. Use straps on those sets only.

Basically, whatever set(s) of whatever exercise(s) where your grip is hindering your performance, that’s when straps should be used. All other times, don’t.

How To Use Weight Lifting Straps

And now for the final strap-related question everyone has the first time they use them (myself included): how the hell do you use these things?

Rather than try to explain it, the best way to understand would be to actually see them in action. A quick search on YouTube brings up plenty of acceptable examples. Here’s one of them…

It will be a little confusing the first couple of times you use them, but after a while you won’t even have to think about it anymore. Also worth mentioning is that this video demonstrates how to use straps with a double overhand grip on a barbell. They can be used just the same with dumbbells, or a pull-up bar, or by using an underhand, neutral or mixed grip.

(And by the way, I’m not endorsing anything the dude in this video is doing, saying or selling other than how to properly put on and use wrist straps.)

How NOT To Use Weight Lifting Straps

And just because I’ve seen it enough times to know it needs to be mentioned, the use of straps is only warranted during exercises where you’re working against gravity or where the resistance is pulling away from you.

That mostly means all types of deadlifts, rows, pull-ups, chin-ups, lat pull-downs, shrugs and anything similar.

So if you’re lucky enough to see someone in your gym using straps while bench pressing (something I’ve seen plenty of times), feel free to point and laugh at them. Just like rolling your shoulders during shrugs or trying to recreate a pec-deck/chest fly machine while seated upright and using dumbbells… that’s just not how gravity works.

Which means, if you’re using straps during a pressing exercise, you’re not accomplishing anything other than making yourself look like an idiot.

And this again comes back to the point I made before. Unless your performance during an exercise is being hindered by the fact that the weight is sliding out of your hands (something that just can’t happen during a press on account of that darn gravity thing again), then you shouldn’t be using straps.

But if it is, then by all means… feel free to use them. I do.

UPDATE: Just updating this article to mention that I’m currently using Versa Gripps Pro instead of traditional straps. To learn why, check out my full review and comparison right here: Versa Gripps Pro Review: Are They Better Than Straps?

242FacebookTwitter1Pinterest
243
SHARES
ABOUT THE AUTHOR

53 thoughts on “Weight Lifting Straps: When And How Should You Use Them?”